Our fall release provides more detailed funding sources and expanded company types, viewed on the company details page and accessible through searches. Funding sources have now been broken out from the VC umbrella to include venture capital, private equity, angel group, accelerator and corporate investor. In addition, companies that have filed for but not completed their IPO are now broken out from Public companies as “IPO Filed“.

In the past, we’ve used “active” both as a company type (two rounds or more of funding) and to indicate that a company is still “active” and doing business. With this release, the term “active” refers only to a company’s status as in business or out of business. Companies that have 2 or more rounds of funding are now labeled as “Later Stage”. There are nine company types, displayed on company details pages and searchable in advanced search. They include:

Funded company that has raised its 1st round.

Funded company that has raised its 2nd or later rounds.

Company has filed for but not completed its IPO.

Funded company that has completed its IPO.

There are three additional company types not involved in venture funding that you may see in our in the database.

Funded by founders or non-venture sources.

Company imported by a member, details have not been curated.

Provides a variety of professional and other services to Silicon Valley companies.

Most searches filter out inactive companies. However, you can include them in your search using the Company Type field. Inactive companies are those that have closed, or been subsumed as the result of an acquisition.

On views you can now sort by total capital or last round to surface the companies in your list or search results that have raised the most capital or the largest last round. 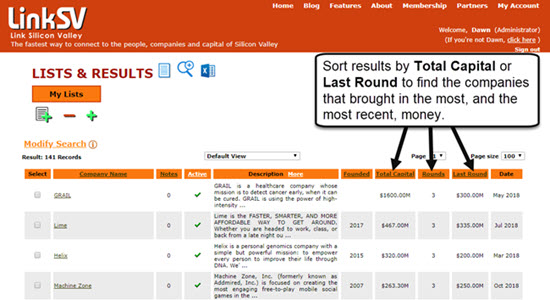 Coming next: Moving to Amazon